The Mandsaur Institute of Ayurved Education & Research is situated in the vicinity of rich nature, ideal for nurturing and flourishing Ayurveda Education. Mandsaur is famous for its medicinal flora and farming of medicinal herbs providing an ideal platform for the students to learn Ayurveda. The eco- friendly environment of college campus extends to a vast 40 acres. It is equipped with all the facilities like Library, Practical labs, Pharmacy, Herbal garden, Hospital as per the directives of the CCIM.

Ayurveda – the science of life

Ayurveda is the ancient life science of Indian origin. It is the first ever fundamental systematic and scientific medical science known to mankind. Ayurveda is known as the sub treaty (Upa-Veda) of Atharva Veda. Atharva Veda is one of the four Authoritative texts called the Vedas. The basic principles of Ayurveda about life, nature, spirituality and medicine are derived from the refined knowledge. The fundamental principles and theorems of Ayurveda are time tested and evaluated. Hence despite of the change in time and lifestyle of the people, Ayurveda is still a relevant science of life.
Ayurveda has played a central role in the cure of diseases and ailments with help of natural herbs and therapies. It believes in curing the body first and then the disease for quality and longevity of life by natural ways of therapies like Panchakarma (detoxification) and Kaya Chikitsa (Healing and enkindling of Biological Fire). This way of Ayurveda therapy has established it as a safest and effective form of therapy offering perfect balance of mental, physical and spiritual health worldwide.

The process for admission of students for the academic year 2019-20 has been initiated by AYUSH bhopal. As per the notification of AYUSH bhopal we need to notify the fee details for the academic year 2019-20, the documents required for admission process in our College website. The required documents are as follows:-
1. 10th Marksheet
2. 12th Markshet
3. Transfer Certificate
4. Migration certificate (Only for other state candidates)
5. Cast certificate (Only for the ST/SC/OBC candidates)
6. Income Certificate (Only for the ST/SC/OBC candidates)
7. Domicile Certificate
8. Document verification slip.
9. Allotment letter.
All the above mentioned documents are required in original along with three set of self attested xerox copies of the same.
10.  5 passport size photograph same as submitted by the students at the time of MP online registration.
11.  Fees (should be submitted at the time of admission by Demand draft or Cash)
12. At the time of admissions student should bring D.D. for fees and all the above mentioned certificates without which admission will not be made.
Demand draft for tution fee should be made in favor of Mandsaur University payable at Mandsaur and Hostel fees demand draft should be made in four of Mandsaur University payable at Mandsaur
*conditions apply for fee

*Candidates need to have qualified NEET 2019 to get admission in BAMS course. 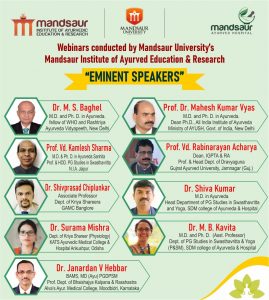 1.“Concept of Ahara” by Dr M.B.Kavita

4.”The concept of dhatu poshana nyaya and it’s application” by Dr S.P.Chiplunkar 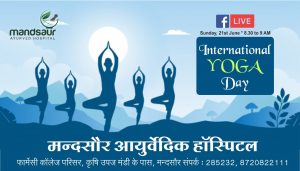